Who Is James Pavel Shawcross

James Pavel Shawcross is a pianist and drummer in Pen Valley, California. He has sung 217 songs and 1,352,761 views on Fandalism.

Shawcross started playing the piano at the age of 5. James has dramatically progressed and improved on this skill with age from the videos he posts online on his YouTube channel, Instagram, and other platforms.

At the age of 14, he has fully mastered some of the most challenging movements in music. In fact, at this age, he can play music perfectly well, all from his memory!

While commenting on his ability to play all by himself, James says, “It’s not perfect, and it’s not effortless, but I’m glad to know I make it look easy.”

After being featured in a Facebook video playing piano, James has won a whole new following. In the video, he played the keys in a Grass Valley Salvation Army thrift shop when a woman walked by and asked to capture him playing. Well over 278,000 new fans have watched the video.

While commenting about the video, James said, “It’s really fun to go out there and play for people and get up there on stage and smile and see the audience and all kinds of things.”

This is a great sign James enjoys the game and cares about the perception other people give his music. Besides, he says that he likes performing, which makes practicing worth it.

James has dreams to scale higher heights in his piano artistry. “Sometimes I’m playing at a restaurant or a hotel, and I’m playing this junky little piano, and they can’t tell that it’s junky,” Shawcross says. He also adds, “They love my playing, and then you know, people start crying – the good kind of crying, and I’m glad I made their day.”

He is, therefore, an enthusiastic piano and drum player with the ever progressive urge to play and make more people happy with his music. He hopes to study one day at a musical conservatory, and his dreams are all set on performance at Carnegie Hall.

Young James plays a modified version of Chopin’s Fantasy Impromptu on all kinds of pianos. James is known to play at hotels, restaurants, and any other place where he finds an unguarded piano. 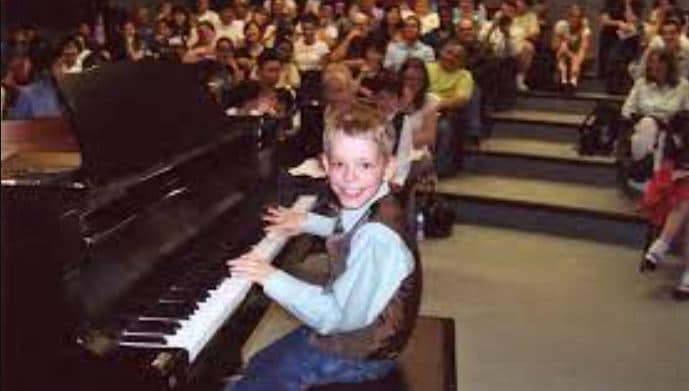 Other places he has been seen to play include the Salvation Army, retirement inns, department stores, etc.

James was most recently invited to play at the Sacramento Ragtime Society this year. He played several times there. He enjoys hanging around people who share the same thrill about music.

On the other hand, James always looks forward to new material. He yearns to learn new music, skills, and any other thing he feels new about playing the piano and music in general. Also, he loves classical and enjoys playing together with other musicians.

James has a YouTube channel – ThePianoforever, where he uploads all his live videos. The channel has over 79000 subscribers, and his videos are viewed at least once every hour.

Many of his fans who watch the videos are very satisfied. Besides, they are exceptionally inspired by how good James can play the keys at that young age.

James has a huge following and his fans are happy about what they get. Major Jesse Carnes, a YouTube fan of James Shawcross, is astonished that James is so creative that even when playing the keys around many people, he can still compose music.

He says on Shawcross’ channel and while commenting on his video, “James…you are very gifted. I am a Christian and a pianist for my church.

ThePianoforever, James’ YouTube channel, has over 50 videos, with the most popular one – Yamaha’s Astonishing $50 Keyboard (PSS-F30), getting up to 764,000 views.

He has 27 playlists, including the “time Capsule Series” with 3 songs, “Piano Keyboard Review Series” with 49 songs, and “Travel With Music” with 4 songs, among others.

James is a perfect composer and player of the keys. In April 202, he developed a melody, A dedication to New York – “Grand Central Station.” In this melody, James sings with vigor and dedication to his fans while encouraging them to stay home and be safe from the Coronavirus.

As a solo artist, Shawcross says that he prefers to record the composition process to listen back to what he did, just in case he forgot.

His songs are significantly followed, with every track uploaded on YouTube getting up to 5,000 views and above. Besides, he has many happy fans and followers who return lovely comments and feedback to James to encourage him never to stop singing.

James Pavel Shawcross is on Instagram. His account _.thepianoplayer._ is followed by many. Shawcross uploaded a video while playing Davy Jones theme of Pirates Of Caribbean on Harpsichord.

The video is viewed by over 190 people and liked by over 30 fans. This is a good sign that many fans and even upcoming pianists have looked up to John. You can also check out another child prodigy who became a famous piano player, Tom Brier.