Home Ukuleles What Are the Ukulele Brands Made in Hawaii? 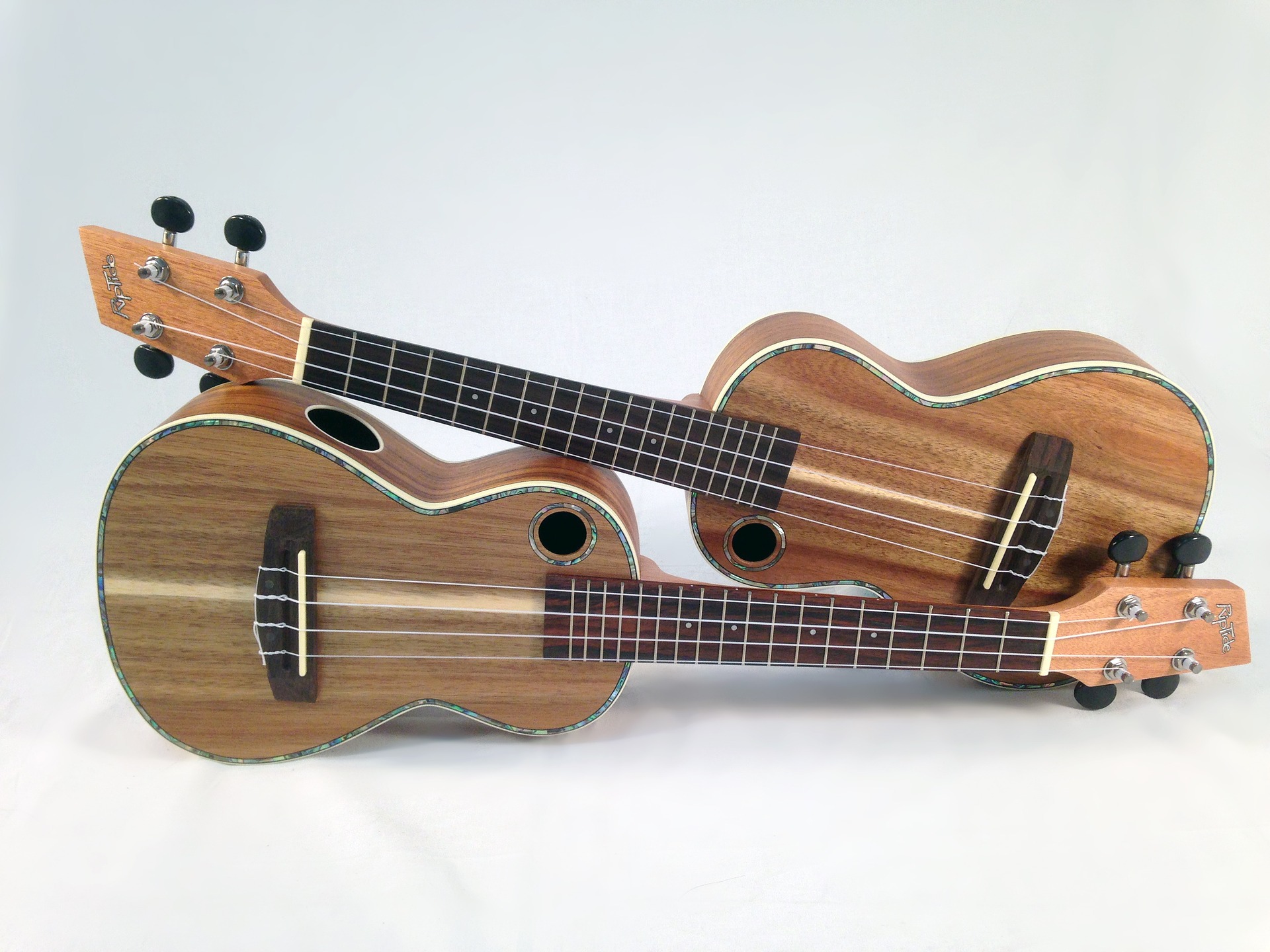 Are you looking to learn about the ukulele brands made in Hawaii? You’re in the right place!

The ukulele is a Hawaiian musical instrument that has become popular all over the world. Ukuleles come in many shapes and sizes, but they all have four strings. The ukulele was first brought to Hawaii by Portuguese immigrants who settled on the island of Madeira near North Africa.

They were looking for an easy way to make music, so they took their ukuleles with them when they moved to Hawaii in 1879! Today you’ll find ukuleles in many different styles, such as soprano ukes, tenor ukes or baritone ukes–they’re perfect for any skill level!

In this post, we’ll discuss some of the ukulele brands that come from Hawaii to help you learn more about them.

First on this list of ukulele brands made in Hawaii is Kamaka. The Kamaka ukeleles were the first to be manufactured on Oahu, which is where they’re still being handcrafted even today!

They are one of the most famous and illustrious in Hawaiian music, with Samuel Kaialiilii Kamaka establishing the firm in 1916 when he set up a basement workshop at his home in Honolulu.

By the mid-1920s, Kamaka had opened a store outside of his home, where he developed the pineapple body that is now used as an alternative to the traditional bell shape.

As demand for his instruments increased over the following decade, he invited the assistance of his two sons, Samuel Jr. and Frederick, who were still in elementary school at the time.

Samuel Jr. took over the family firm after his father died in 1953, and he oversaw rapid growth periods throughout the next several years.

Frederick joined the firm as its general business manager in 1972, having retired from a 20-year career with the US Army. As a result, the next generation of Kamakas was recruited into the firm.

The Kamaka company, which now employs 29 people and produces about 3,000 instruments each year, is perhaps the most illustrious instrument-making firm in Hawaiian history. Its stock models cost from $895 to $2,495 today, up to the high standards set almost a century ago by its senior Kamaka.

“My grandpa always emphasized that the instrument’s bottom line is its sound,” says Chris Kamaka. “It’s really gratifying for us to continue creating ukuleles with care and using the finest materials possible, which live up to our family name.”

The Kamakas are popular for their full tone and durability of construction. “People bring in old Kamaka ukuleles for repair, some of which were made by my grandfather. Unless [an amateur repairer] has messed with them, as they’re so well built, it’s typically simple for us to take them apart and get them playing again,” says Kamaka.

Custom ukuleles are also available, but due to high demand, the firm is not accepting new orders for them right now. However, it is filling Special orders—stock instruments that are semi-customizable and come with upgrades such as AAA or AAAA koa, spruce soundboards, wood or shell rosettes, ebony fretboards and bridges with fretboard inlays, long necks, and passive or active electronics.

These bows can take anywhere from three to four months to arrive—but they’re well worth the wait. “You get a one-of-a-kind ukulele that will last you a lifetime,” says Kamaka.

Kanile`a is also among the ukulele brands made in Hawaii.

Kanile’a is based in Kaneohe, a census-designated place on the island of Oahu. It’s a family-owned business led by Joe Souza, the instrument maker, and his wife, Kristen, who manages customer sales and accounting.

“We complement each other wonderfully,” Souza adds. “I’m the builder, but Kristen, who looks after administrative work, is really the company’s backbone.”

Souza, like most, if not all, natives of Hawaii, was exposed to a lot of ukulele and guitar singalongs during his youth. He was compelled to play the ukulele as part of his primary school education, but it wasn’t until high school that he took it seriously.

In 1991, Souza enrolled in a master luthier’s apprenticeship with Peter Bermudez at the age of 20. “I had no idea how vital it was for me to learn from ‘Uncle Pete.’”

Souza is still making about five to six professional-grade ukuleles each day, or 1,400 per year, after over 25 years. The instruments cost between $700 and $3,000, while budget ukuleles made in the Islander brand are available for between $100 and $600.

Every Kanile’a ukulele comes with a unique manufacturing process. For one thing, the firm mills its own wood. “We start with felled koa trees, waxing and allowing them to dry right there in the jungle before being air-dried in our shop,” Souza states. The business also takes part in an active reforestation effort.

The TRU bracing system on Kanile’a instruments takes into account not just the forward-backward and left-right movement of a vibrating soundboard, but also the up-down movement. The TRU bracing in Kanile’a is essentially a truss structure with tone bars passing beneath the braces.

“TRU stands for ‘total resonating ukulele,’” according to Souza. It takes more effort (than traditional bracing), but the end result is well worth it for its greater sound and stability.

Each Kanile’a ukulele has an ultraviolet-cured coat finish comparable to the one Taylor Guitars introduced in the mid-nineties, which has both visual and environmental advantages.

They harden the finishing through the ultraviolet light or direct sunlight. It does not check because it stretches when the instrument is subjected to temperature changes, unlike [nitrocellulose lacquer].

ALSO READ: How Fast Can You Learn to Play the Ukulele?

John Kitakis, the luthier who runs Ko`olau Music in a lovely location between the Ko’olau and Waianae Mountains, began tinkering with guitar repair when he was just 14 years old. 50 years ago, while still in his teens, Kitakis began studying guitar repairs.

He began his professional life as a furniture maker and restorer of antique furniture in the 1970s. This put him in an excellent position for his next career choice, repairing stringed instruments of all kinds.

“I deliberately avoided focusing on creating new because I saw a strong need for repair and restoration,” Kikitakis adds. Aside from meeting that demand, I wanted employment, and repairing is not something most luthiers like to do.

“Like an ancient home, no one wants to renovate them. But they do it for the sake of a challenge and job security. Customers brought me more and more guitars, mandolins, banjos, and ukuleles to repair as I went along. Then they requested that I create new ones.”

Kitakis began his career repairing pianos. This saw him eventually branching out into guitars when he was joined by his sons Noa and Andrew, to work with Martin, Gibson, Taylor, and other major manufacturers.

In the mid 90s, the family began Koa Ukuleles and Guitars, a company that specializes in high-end instruments.

Ko’lau guitars are perhaps the most daring of the four K’s. In addition to traditional bell and pineapple-shaped guitars, its assortment includes a hand-carved tenor archtop with cat’s-eye f-holes and a cutaway, semi-hollow tenor electric.

Although the Ko’lau group employs a lot of koa in its instruments, it constructs with a wider range of tonewoods than its Hawaiian counterparts—including native tropical ash and Brazilian rosewood for the backs and sides, as well as Adirondack spruce and redwood for soundboards.

Ko’au’s one-of-a-kind instruments are its most enticing products. The firm produces between 300 and 400 each year, starting at $1,600 and costing as much as $13,000 for a tenor archtop with elaborate inlays, for example. Construction time ranges from eight to 12 months, and extensive discussion between the creators and purchasers is required.

“The making of a bespoke instrument is a lengthy, meticulous, and collaborative process,” Kitakis adds. “As such, we recognize and encourage customers to participate in the process. We want open communication that leads to full comprehension and contentment at the end.”

KoAloha is a relatively recent company based in Honolulu. Alvin “Pops” Okami, the patriarch of this family-owned business, was an inventor and musician. He once ran his own successful plastics factory. They are among the best ukulele brands made in Hawaii.

Okami began his career as a maker of tiny playable ukuleles before transitioning to full-size versions. Later on, other family members joined the company.

“We eat together every day and occasionally have guests over to join us. Our objective is for anyone who comes into our store or travels with us to feel the same way. It doesn’t matter whether they buy anything or not.”

The brand name KoaAloha is a portmanteau of the words koa and aloha. The company specializes in making use of koa in its instruments.

Koa’aloha’s guitars tend to be conventional in design, with soprano, concert, and tenor versions available in standard or pineapple forms. (Smaller-bodied models come with long necks as an option.)

The aesthetic differences between KoAloha instruments and other ukuleles are quite significant. Although they have a traditional lively sound, they depart from tradition in a variety of ways—sometimes significantly so. The Sceptre, which is somewhat like the B.C. Rich of ukuleles, takes its distinctive pointy form from an ornamental staff.

The new KoAloha Naupaka line (see page 90) incorporates a unique combination of koa and mango wood throughout the entire body, including the tops, sides, and backs. Other times, the distinct features are more subtle.

There are a variety of KoAloha ukes for every budget. They range from an Indonesian-made entry level (KoAlana) to a Thailand-made mid-level line (KoAloha Opio).

Soprano ukes in these categories range from $175 to $800. However, the Red Label (non-commissioned) and Black Label instruments produced by the company’s custom shop. These can cost up to $4,000—are extremely coveted. “Our Black Labels have a three-year waiting list,” Okami adds.

So there you have it! Those the famous ukulele brands made in Hawaii. The good thing about them is that they offer quality, affordability, and are quite reliable. There are also other uke brands that cone from the U.S but we’ll get to talk about them in a later post. Therefore, keep an eye out for that.