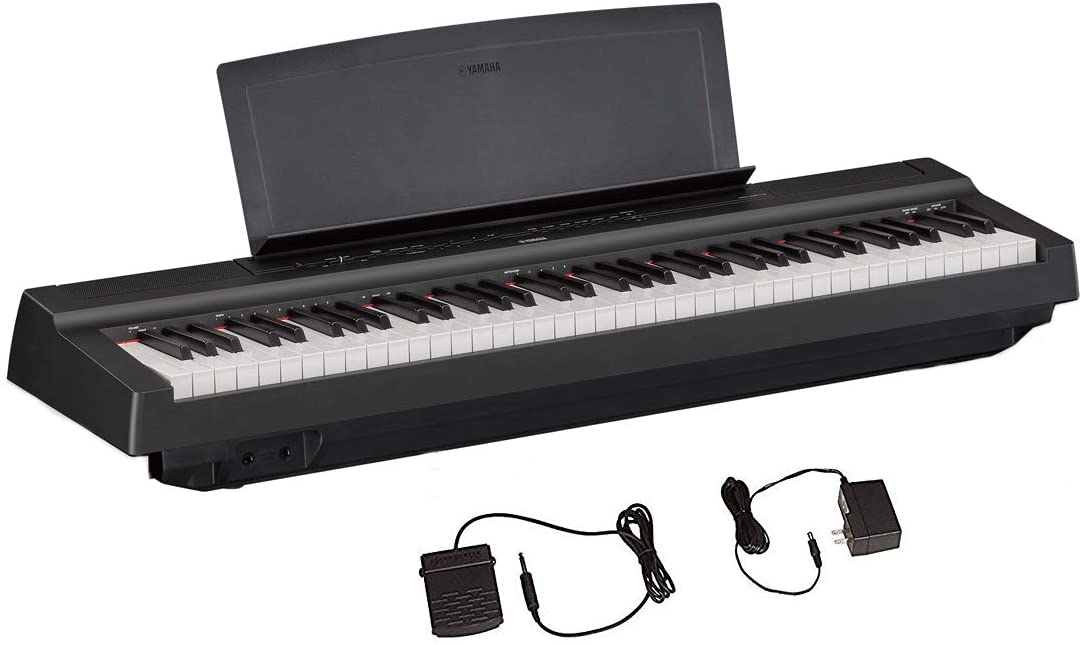 The P121 features 73 keys, unlike the 88 notes available on the P125. This is mostly what these two models have indifference. This Yamaha P121 review takes an in-depth look at this piano’s capabilities. We aim to give you adequate and honest information concerning this product to help you make an informed decision on your purchase.

The Yamaha P121 is a compact digital piano featuring 73 keys with astounding piano performance and user-friendly minimalistic design. It is highly portable and delivers optimal playability, allowing you to play it on your terms.

The piano comes fitted with the Pure CF Sound Engine, which offers some decent acoustic piano samples when playing. Additionally, the keyboard houses Yamaha’s GHS action with a polyphony count of 19-notes. Now, the latter is rarely seen, especially in 73-key digital pianos, which makes the P121 stand out in its right.

The piano only weighs about 22lbs, which contributes positively to its portability. One more thing to highlight about this instrument is that it comes with a USB to Host connectivity options, among others. But this connectivity capability, in particular, offers more leverage on playability, especially for beginners. You can use it to exchange between MIDI files and merge the instrument with your PC to enhance playability.

That being said, let’s now dive into the full review of the Yamaha P121 digital piano.

The Yamaha P121 digital piano comes with a similar design as other P-Series digital pianos. It features a modern minimalistic structure, and it’s available in both black and white colors. The front panel is equipped with just enough buttons to help you access all the functions.

You also get a three-pedal unit that completes the Yamaha P121 into a full stylish digital piano, capable of delivering optimal playability. The Yamaha P121 dimensions measure 43.86” in Width, 6.54” in Depth, and 11.61” in Height. Such numbers are pretty standard for a portable digital piano. Therefore, this instrument can fit perfectly in small apartments, studios, and inside a car, making it the perfect traveling instrument for gigging musicians.

On the front panel of this piano, there is a volume control fader alongside multiple other buttons. Choosing functions on the P121 requires you to use many key-button combinations, which in some instances, will prove to be a hassle. So, you’ll need the Yamaha P121 manual to help you select the functions you prefer. The good news is that the Smart Pianist app can make this process more manageable since it’s compatible with the P121.

An optional L-121 piano stand is dedicated to this model and makes it look more stunning than the universal one. Either way, you can rock the P121 from any stand, and it will still deliver accordingly.

And as a Yamaha keyboard, the P121 also comes with the Graded Hammer Standard keyboard action. The GHS action is expected in Yamaha’s entry-level digital pianos, but it still delivers a decent imitation of the acoustic piano touch.

With the GHS action, keys in the lower register feel heavier than those on, the higher register, which feel lighter. The action is the same in acoustic pianos, and we commend Yamaha’s GHS action for delivering a good imitation, especially for the beginners’ benefits.

The black keys on this piano feature a matte black finish that prevents the fingers from slipping while enhancing playability. Overall, we think Yamaha did the best they could on this piano’s keyboard.

As you may know, the Yamaha P-series is a famous line for coming up with pianos that have excellent sound quality. For that reason, the P-series is one of the best-selling piano production lines in the market.

From that realization, the P121 shouldn’t be any less different, and indeed it isn’t. Although it only features 73 keys, the Yamaha P121 sound capabilities are nothing close to disappointment.

It features samples from Yamaha’s acclaimed acoustic pianos to give you some of the best sounds you can hear at this price range.

The Yamaha P121 digital piano also comes with a total of 24 built-in voices, which all sound distinctive and expressive in their way. Among the voices are:

The P121 sounds amazing in low frequencies, which enhances its ability to replicate an authentic acoustic piano. That’s not all; the Yamaha P121 digital piano features an impressive polyphony count of 192-notes, which is something you rarely get on a 73-key digital piano. This number is more than enough, especially for intermediate players who this piano is mostly meant for.

Such a polyphony count will enable learners to play intricate pieces as they gradually sharpen their playability skills. Moreover, the piano as well comes with Yamaha’s Pure CF Sound Engine. This sound engine adequately replicates a real acoustic piano’s sound to give you rich and expressive tones of the traditional piano.

The tones produced by this sound engine have a wide dynamic range, deep reverberations, and are more detailed. And to enhance the sounds even further, the P121 also comes with four Reverb types, including:

With the Pure CF Sound Engine, the sounds on the P121 are sampled from the brand’s CFIIIS 9’ concert grand piano. The resulting sounds are full of dynamics and expression, something that any pianist loves to hear.

The Yamaha P121 digital piano has 71 Preset Songs, with 50 of them being Piano Songs, while the remaining 21 are Demo Songs.

This instrument’s sound generation is also worth its price as the P121 features two 7W amplifiers alongside a built-in stereo speaker system 12cm (x2) + 4cm (x2). The sounds are produced to reach a great distance, and they are of good quality as well.

Additionally, the P121 also features a unique function that Yamaha likes to call Table EQ. The feature optimizes the piano to sound still authentic even when placed on a flat surface. That’s what makes the P121 sound great at low-frequency sounds.

The piano does lack the string resonance and the key-off simulation, which makes digital pianos sound livelier. But considering the price and the target audience, we think the P121’s sound quality was well thought on execution.

It doesn’t come with a surplus of connectivity options, just the basics that will get the job done. Below are the connection capabilities available on this instrument:

This piano is also compatible with Yamaha’s Smart Pianist app, which can further enhance the piano’s playability and learning experience.

The Stereophonic Optimizer enhances the sound generation of the piano. When playing with headphones, this feature allows you to hear the same level of dispersed sound from the P121.

In a nutshell, the voices sampled from acoustic pianos sound like they are coming from the body of the Yamaha P121. Hence, the feature is responsible for a natural and comfortable experience, which nullifies the negatives of playing with headphones.

Yamaha is also an enthusiast contributor to the green environment, and this feature is a good testimony. The Auto Power Off in the Yamaha P121 digital piano automatically shuts down the instrument after a specific time of inactivity.

The feature can be disabled, but you can also customize it according to your preference.

The Intelligent Acoustic Control is Yamaha’s creative invention that strikes a balance between an instrument’s bass and treble. Yamaha made it to combat the loss of bass and treble whenever the piano was played at low volume levels.

IAC balances the mix between the two (bass and treble) and delivers both deep and authentic sounds.

It comes with a built-in recorder that allows you to record one track and two songs in its internal memory. It’s an excellent way for beginners or intermediate players interested in composing music to start their journey.

The built-in Metronome will aid learners in training sessions to enhance their timing and rhythm skills when playing. Also, the Metronome feature can be useful in determining whether you are accurately playing the tune or not.

Other additional features of the Yamaha P121 digital piano include the Transpose Function, Split and Duo Function, and the Dual Voice. This piano is a real powerhouse for an entry-level keyboard, and beginners would certainly enjoy its capabilities.

Owning the P121 would be beneficial in many ways, especially for the intermediate players. From spending a good time with it, here are some of the benefits we noted you could enjoy from the P121.

Weighing only 10kg, the P121 is the lightest digital piano in Yamaha’s P-series. Therefore, you get a high level of mobility with this instrument without sacrificing playability.

The P121 comes with multiple features that are rarely present in pianos of the same price range. From the Intelligent Acoustic Control, Stereophonic Optimizer, and a Polyphony count of 192-notes, among others, this piano sets the standards as one of the best entry-level, 73-key digital pianos.

As detailed earlier, the Yamaha P121 digital piano features a built-in stereo speaker system that delivers powerful sound generation. You can perform with it to a small crowd, and the generation will accommodate decent results.

With a total of 71 Preset Songs on the P121, intermediate pianists can undoubtedly leverage on their learning process during practice sessions. The Preset Songs include 21 Demo Songs and 50 Piano Songs.

Compatible with the Smart Pianist App

Because the P121 is compatible with Yamaha’s Smart Pianist app, you can easily access more voices and sounds to stretch the piano’s playability.

Why You Should Buy the Yamaha P121 Digital Piano

If you are looking for a budget-friendly modern digital piano that doesn’t sacrifice features and playability, the P121 is the go-to option. It packs multiple features, some even found on high-end models. It features a simple and minimalistic design, which makes it favorable for traveling without a hassle.

And though not a full-sized keyboard, this instrument’s sound engine is another useful takeaway for a 73-key digital piano. Considering the benefits and capabilities explained above, you’ll undoubtedly be getting a good deal from Yamaha when you purchase this instrument.

Yamaha P121 digital piano is an instrument that manages to attract players with different levels of playing skills. It’s compact and portable nature makes it a decent option for regular gigs, and even professionals can fancy its use for practicing.

But as for the beginners, this instrument will oversee your success in elevating your piano playing skills. It’s affordable and portable, but the best part is that none of these attributes sacrifices the Yamaha P121 digital piano’s level of authenticity.

It’s a good investment for both present and future music endeavors for intermediate level pianists.